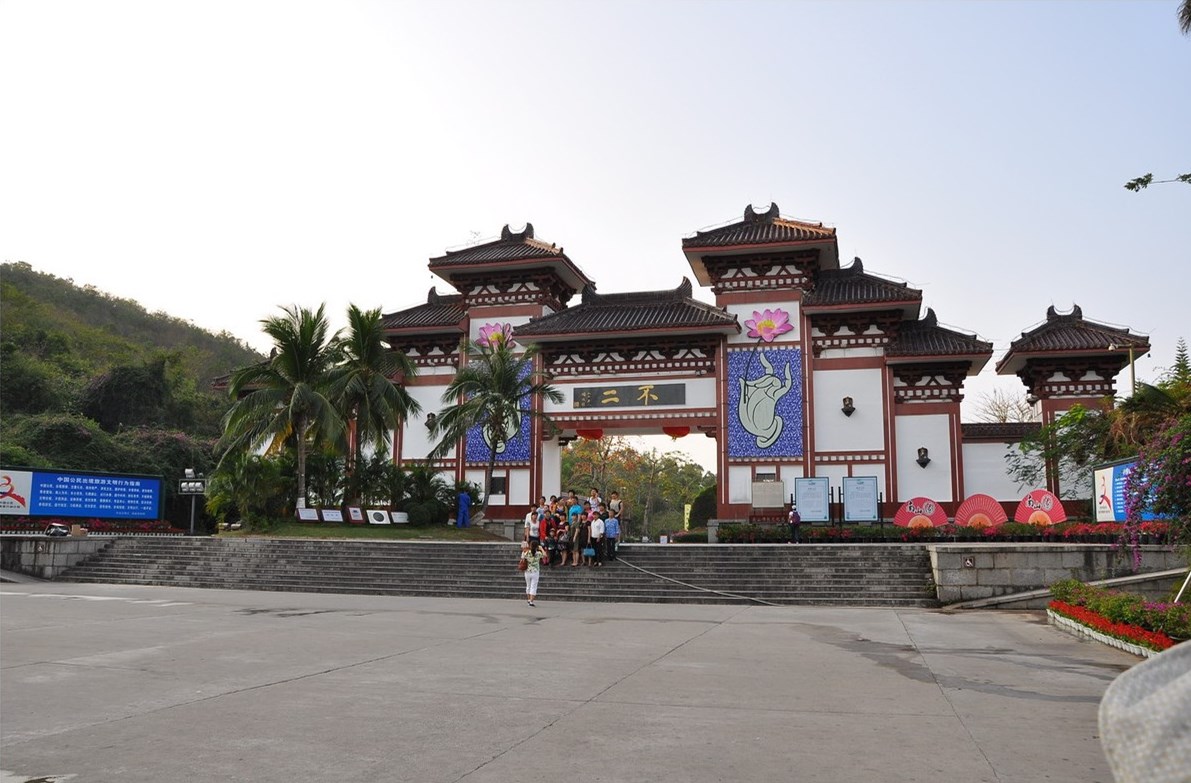 Nanshan Temple (Chinese: 南山寺; pinyin: Nánshānsì; literally: “South mountain temple”) is a Buddhist temple located in Sanya, Hainan province, China. It is one of the largest cultural tourist attractions of its kind in China, the colorful Nanshan Cultural Excursion Zone, located just 40 km west of Sanya City along the Hainan West-line Expressway is, 1.5 hours from Downtown Sanya, 40 minutes from Sanya Airport, and only 15 minutes from Yazhou Ancient Town.

Luhuitou is a peninsula with water on three sides. It sits in Sanya Bay, which is five kilometers from the city. Luohuitou Park is situated on a hill of Luhuitou Peninsula near the seashore, three kilometers away from Sanya city in the south. It is 30 minutes driving from Sanya Airport, 20 minutes from Yalong Bay and 30 minutes from Haitang Bay. 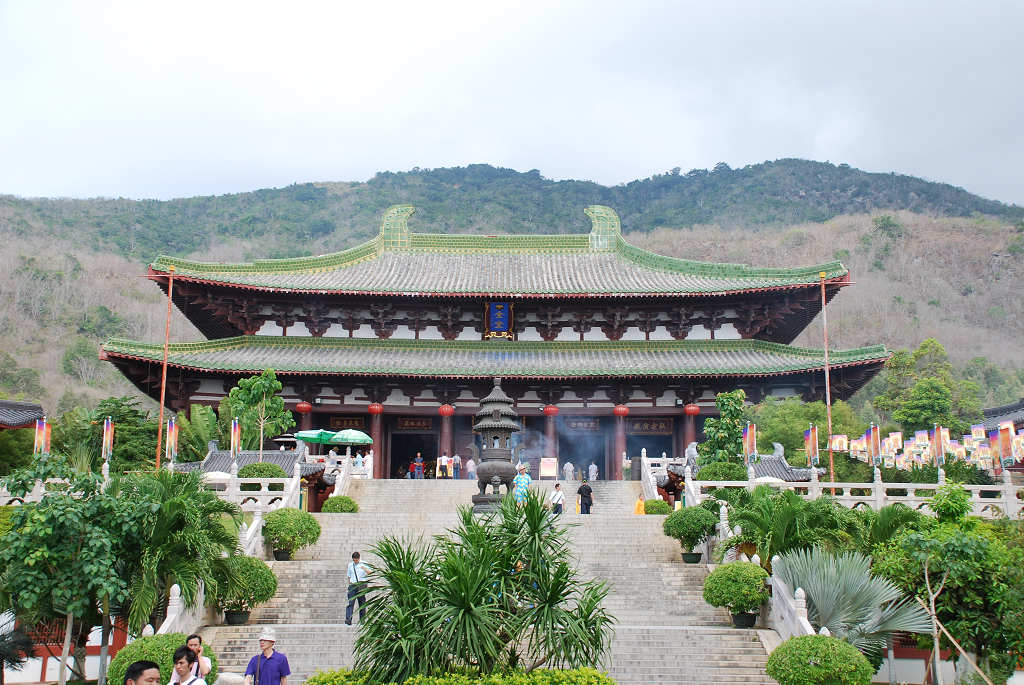 What to see or do Nanhai Guanyin Buddha Sanya Hainan Island?

The temple’s name originates from a popular Buddhist expression. (Chinese: 福如东海, 寿比南山; literally: “Good fortune is much as the East Sea; longevity is high as Nanshan”). Nanshan Buddhism Culture Park & Nanhai Guanyin Buddha is a window on China’s traditional Buddhism culture; the Felicity and Longevity Culture Park shines its light on an atmosphere of peace and harmony, and the Nanhai Cultural Customs Park highlights China’s diverse social customs. Key features of the zone include the three-sided statue of Buddha, Buddhist temples, superior landscaping, and sea views. The new highlight is the Nanhai Guanyin Buddha on the sea (108 meters in height).

HISTORY: The temple was built on April 12, 1988, to commemorate two thousand years of Buddhism in China. It has a total area of 40,000 square meters. It contains several Tang dynasty replicas.

The temple is part of an area known as the Nanshan Buddhism Cultural Zone, classified as a AAAAA scenic area by the China National Tourism Administration.

The zone also consists of the Guan Yin of the South Sea of Sanya statue.

GEOGRAPHY: It is located just 40 kilometers west of Sanya City along the Hainan West Expressway. It is a window on China’s traditional Buddhism culture.

SUMMARY: The Nanshan Cultural Park highlights China’s diverse social customs. The key feature of the zone is the three-sided statue of Guan Yin Buddha（海上观音 Haǐ shàng guān yīn）, Buddhist Temples, spectacular landscape and sea views. The zone has been designated a Priority Project of China Tourism Development and earmarked for further development. Recently completed, the bronze statue of Guan Yin Buddha stands 108 meters tall on a man made island in the sea just off Nanshan. It is larger than the statue of liberty.

Nanshan, with its harmony and beauty, is now a tourist destination attracting more and more tourists coming from all over the world. It is here that people can enjoy themselves not only in the great tropical ecological environment with sunshine, sea, sand, blossom and greenery but also can feel with heart deep within the real beauty of peace and harmony of Buddhism culture and terse the joyfulness of returning to the nature.

You must visit Nanshan Culture Center for the following reasons even if you have no interest in Buddhism: 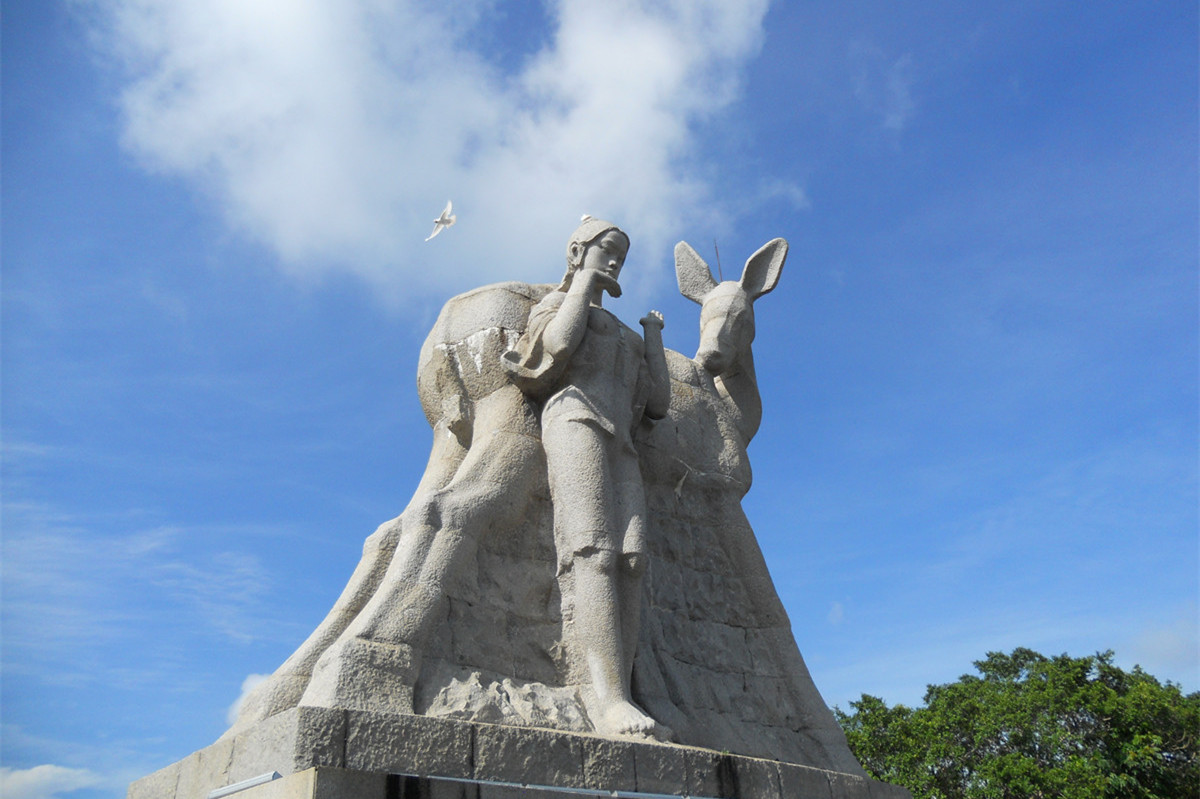 What to see or do in Luhuitou Park Sanya Hainan Island?

Deer Park or Luhuitou Park in Chinese is located high on a hill overlooking Sanya City and provides visitors with sweeping vistas of the city, its surrounding area and the South China Sea. The park features a 12-meter-tall statue commemorating the legend of a brave young hunter and a mountain deer that transformed into a beautiful young girl. A tyrant emperor desired a pair of hairy deer horn, so he forced a young Li man named Ahei to hunt for deer on the mountainous areas. While Ahei was hunting, he saw a beautiful spotted deer chased by a panther. He shot the panther to death with his arrow, and then ran after the deer for nine days and nine nights. After passing ninety-nine hills, they arrived at the Coral Cliff of Sanya. The deer had no way to escape except to jump into the sea, and the hunter bent his bow and got ready to shoot. Suddenly, the deer turned its head back and changed into a beautiful girl, and walked toward him. The hunter and the girl fell in love and got married. In the end, the fairy girl got her brothers together to defeat the tyrant emperor and settled on the cliff. After several generations of hard work, they developed the Coral Cliff into a beautiful farm. From then on, the romantic hill has been called Luhuitou

A charming park was built on top of Luhuitou and a huge sculpture 9 meters long, 4.9 meters wide and 12 meters high was set there in accordance with the moving legend. The city has also been nicknamed “Deer City”.

The panoramic view of the vast sea, the rolling mountains and Sanya city from the top of the hill is fantastic. Inside Luhuitou Park are winding paths, a Halley’s comet observation station built on the mountain, a white wave-hearing pavilion, a red Guanghai kiosk, Lover’s Island and other scenic spots such as Monkey Mountain, Deer House, the Hut of the Li People, Turtle’s Heaven and the Immortal Pond. What’s more exciting is that you can taste red coconut, the treasure of Hainan coconuts.

Now the Luhuitou Hill is entitled as the park of love and ecology. The main scenic spots include the Sea-View Platform DeerYardsmooth approachFortune Comes from the EastLove Garden Li Ethnic SINGING AND DANCING PERFORMANCE Luhuitou Sculpture hilltop Garden. The luhuitou Park is also the center of vege-tation preservation zone of Sanya and haswell-protected tropical forest and natural ecology with many precious species.

Luhuitou Peninsula is not only a romantic peninsula, but also a lush, natural environment covered with deciduous trees and plants. It is the ideal place to spend a winter holiday in China.

Question: When do we start from our hotel and how long does this tour last?

Answer: It is a private tour, so you decide what time to start. Normally we recommend 9-10am.

Question: How do we make payment?

Answer: We accept credit card with 3% surcharge, PayPal with 3.8% surcharge, bank transfer (no extra charge) , or you can guarantee the booking by your credit card and pay us cash on the departure day. We also accept payment by WeChat & Alipay.

Question: Where do you meet your guide/driver?

Answer: Pick up & drop off is always from your hotel in Sanya or cruise terminal by private car or van.

Question: How long does the tour last?

Answer: It will take around 8-9 hours.

The price is for6 passengers/trip. If only 2-3 passengers in your group, please book for 4, then we will adjust by email.