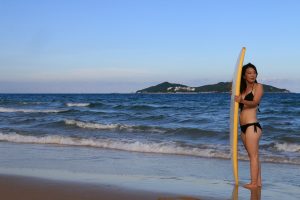 Hainan Island, One Island with two climates: Sub Tropical in the North (Haikou and its surrounding areas), Tropical Climate in the South (Sanya, the beach destination for all visitors to Hainan Island)

Hainan Island enjoys a monsoon sub tropical AND tropical climate with annual average temperatures ranging between 18°C (65°F) and 28°C (82°F) and annual rainfall between 1,500 mm and 2,000 mm. An average of about 12 hours per day have daylight and more than 300 days of a year, on average, are sunny.

Sanya, The Only Tropical Destination of China:  Climate and Average Sea Water Temperature

The average annual temperatures of Sanya Hainan hover at a beautiful 22-28 °C Celsius and annual rainfall between 1,500 mm and 2,000 mm. An average of about 12 hours per day have daylight and more than 300 days of a year on average are sunny.

Caddie has been living in Sanya since 1993. Based on her past experience. there are 3 seasons in Sanya: Hot & Some rains (July-September), Warm & Dry (October till March) and Hot & Humidity (April-June).

It is not too hot from July till September, the highest temperature is around 34 °C. While the temperatures in Beijing, Shanghai, Guangzhou could be over 38 °C. So basically speaking, Sanya is actually cooler than those big cities. With the help of tropical showers or typhoon, day temperature could easily drop down to 26°C-28 °C. Typhoon could be a problem but usually won’t last more than 3 days. And normally after the typhoon, it becomes very hot, and the sun is sharp shining.

It could be difficult for most people as you keep sweating. But it is a good time to get tanned on the beach. The sea breeze helps a lot so you won’t feel that hot if you are on the beach or in a pool.

Haikou, the provincial capital enjoys a sub-tropical climate with an average annual temperature of 20°C (68°F). Haikou spring (April till June) is hot with humidity, almost same temperature as Sanya, the only beach destination on Hainan Island, and the high summer temperatures bring heavy rains. Summer ( July-September) is a season of typhoons and rain storms. October & November is very nice in Haikou, warm and dry. But in winter time (December till February), it can be very chilly with high humidity. So in winter, Sanya is the best destination for your Hainan Holiday.

Haikou’s casual attitude makes packing a breeze. From March till November, shorts, T-shirts are usually all that is needed. For December and February especially during the evening, you need to prepare long pants and coat. Sun blocks, sandals, sun glasses are the must for your holiday in Haikou. Umbrella is not requested as you could get from the hotels/resorts you stay.

Average Ocean/Sea Water Temperature of Haikou Hainan all year around